This might have been the craziest photo session I have ever made.

Why? Because it was snowing all morning only to start raining a bit later. As you can imagine, the snow started to melt in that rain and all of us ended up wet. But this is the end of story. 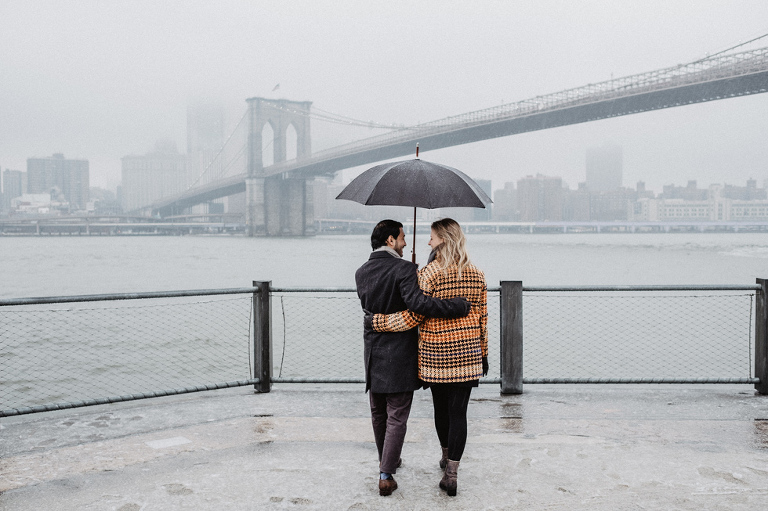 When I was booked for a wedding in Dallas I knew I am going to fly over New York to reach Dallas from the Czech Republic. And naturally, because I have never been to the US and New York was on my bucket list for years, I have decided to make a stop there. And it came again as a perfect idea to me that once I am in New York, I could as well have a photo shoot on or around the Brooklyn Bridge. One couple, who had me to photograph their wedding in Amsterdam last winter, live in New York – so we arranged an anniversary photo session almost exactly one year from their wedding. When I went to Amsterdam last January I had wished for snow to arrive. Imagine snow in picturesque Amsterdam! Unfortunately, the wedding day was a sunny day, freezing but sunny. Claudia almost froze to death in her dress which nobody believes really, as the pictures look like summer ones.

So when the snow in the New York city started to fall down on the streets, my heart was full of joy, from finally having the opportunity to have a winter scene. But the city had a different plan with us. The snow melted down and the rain was not stopping from like noon to 9 pm. But the three of us had just a day to do it. So rescheduling was not an option.

While waiting for Brendan we accidentally ended up in the cool cafe of 1 hotel Brooklyn bridge and we started the session there. Then a super fast 5 minutes session with a hidden Manhatten and that was it! It all felt a bit absurd but I loved the laughter on Brendan’s face and the freezing drops falling down all over them.

By the way, first photo session photographed on FUJIFILM XT2.